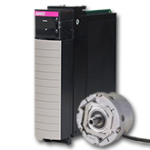 The AMCI 7272 PLC module for ControlLogix was developed for applications requiring a direct interface to encoders that output EnDat data. Plus this card incorporates Allen-Bradley licensed technology for guaranteed compatibility with A-B Series 1756 I/O chassis.

The ControlLogix EnDat interface module from AMCI is a digital, bidirectional interface for encoders. It is capable both of transmitting position values
from incremental and absolute encoders as well as transmitting or updating information stored in the encoder, or saving new information. This module is capable of connecting up to two independent EnDat output encoders/sensors with max 48-bit resolution for position. This module also has two latching inputs, one for each channel, which can be used to capture the sensor’s data.