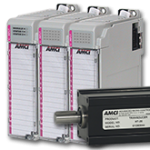 Titled the 2600 series, AMCI newest PLC module is a high speed limit switch module that interfaces with Rockwell Automation CompactlLogix or MicroLogix 1500 systems. The 2600 series PLS controller connects to a resolver and switches outputs based on the sensor's position and has a maximum resolution of 0 to 4095 counts for each rotation (0.088 degree resolution). The module has a maximum of 32 high speed inputs and outputs, 16 of which are physical and 16 of which are virtual over the backplane. The 2600 series module also has the ability to both output and receive serial position data, allowing multiple units to be “slaved” together.

Three different module configurations exist in AMCI's 2600 series of PLS controllers, the 2611, 2612, and the 2613. The 2611 is a single-slot module, offering the resolver interface and 16 virtual I/O over the PLC's backplane. Customers can add 8 physical I/O to the module by specifying the dual-slot 2612 version. Or customers can opt for a maximum of 16 virtual I/O and 16 physical I/O by purchasing the triple-slot 2613 version (shown here).