The Customer
Amity Fire & Safety was founded in 1973, and serves the Fire & Equipment industry

by producing swivels (Figure 1), telescopic waterways, weldments, machined parts, and pins for extremely demanding applications.  Their international customer base includes industry giants such as KME (Kovatch Mobile Equipment), Pierce Manufacturing, and Rosenbauer.  Amity’s customers manufacture the fire trucks that we see at our local fire departments around the world. 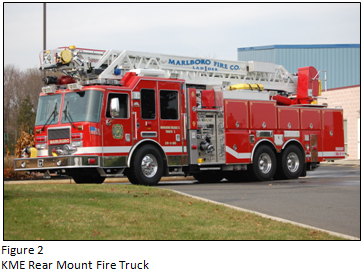 KME works closely with Amity to design and build structurally safe and durable fire trucks.  KME custom manufactures the broadest family of aerials in the fire service, and incorporates IQAN E-Control™ (motion control system) in their trucks to ensure a high level of safety.  The company employs 700 people in 5 locations across US and Canada. 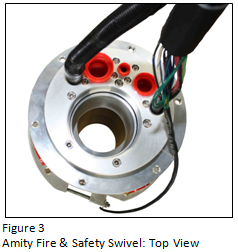 ladder while acting as a pass-through for water and continuous hydraulic and electrical circuits (Figure 3).  The position of the aerial ladder on a fire truck needs to be monitored to reduce risk of injury and damage to equipment.

Amity developed an interlock device through the use of limit switches and flags on their swivels to monitor the location of the ladder and prohibit ladder rotation beyond 0-180 degrees.  This method enabled them to detect whether the ladder was within or beyond certain degrees of rotation (by using physical flags). However, KME found that even though the proximity switches accurately detected the flags, they still couldn’t monitor the position of the ladder within the 0 to 180 degree range of allowable travel.

Without knowing the absolute position of the aerial ladder, damage or injury can occur in several ways.  Trucks could tip over when the ladder’s range of movement is exceeded.  This could happen during a short jacking operation where a narrow jack spread (Figure 4) 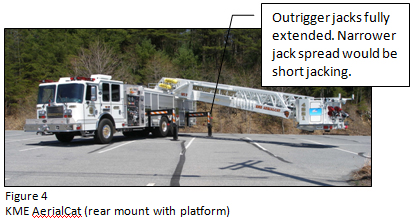 is used to avoid obstacles such as parked cars.

Amity’s project to incorporate encoders in their swivels began in late 2002/early 2003 and Amity soon “became the first company to have production models with rotation swivels mounted on them.” (Jerry Strayer, Amity Fire & Safety Production Manager)

By using an absolute analog DuraCoder® (Figure 5), Amity is able to accomplish the feedback they need.  The DuraCoder tells where the ladder is within the 0-360 degree revolution without any guesswork.  When the ladder is at a low angle, the operator is now capable of automatically stopping rotation at a pre-set point known to eliminate risk 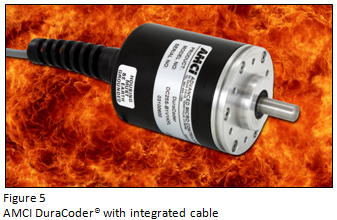 of damage to the body of the truck and injury to firefighters during a rescue operation.

When KME upgraded to their Parker IQAN™ (motion control system), they realized that the grey scale encoder they had initially specified would no longer meet their voltage output requirements.  Additionally, an excessive amount of mathematical programming was required with the grey scale encoder; and together, Amity and KME set out to find a more efficient solution.  “If we want to be successful, we have to get to that next level”.

A change in the signal brings big results
After reviewing all of their options, KME contacted Amity with the solution – AMCI DuraCoder® with integrated cable.  The DuraCoder’s analog output signal eliminated much of the mathematical programming that was necessary with the grey code encoder.  With the integrated cable, KME no longer needed to produce their own cable, simplifying wiring and installation, and ensuring the IP67 sealed rating.

With the DuraCoder, KME’s IQAN “E-Zone™ system stops rotation or elevation of the ladder when the operator attempts to position the ladder in a pre-defined zone (cab avoidance, body avoidance, and short jack operation).  This eliminates the possibility of cab or body damage and makes operation of the device on the short jack side of the vehicle safer”. – KME product brochure 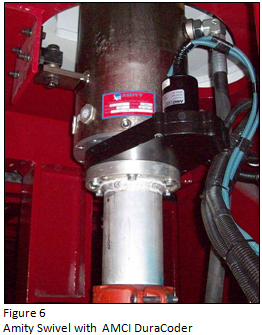 The DuraCoder is installed in an area of the truck that is exposed to water mist during fire fighting, high pressure wash downs, and airborne contaminants from smoke and ash.   AMCI’s DuraCoders are designed to provide consistent reliable feedback while preventing water and contaminant ingress.

Durability was the highest priority when designing AMCI’s DuraCoder family.  The optional 5/8” stainless steel shaft boasts exceptional shaft loading, and the high shock and vibration rating provides reliability where most sensors fail.  The IP67 rated product line comes standard with either a 1/4", 3/8”, or 5/8” stainless steel shaft and an oversized double row sealed bearing.  Additionally, DuraCoder brand encoders are available in six different versions, including SSI, Digital, Analog, Incremental, DeviceNet, and Ethernet/IP.  With optional stainless steel housings and a variety of mounting styles, the DuraCoder is ready for any application. 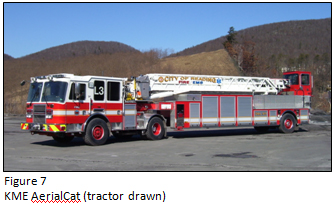 and their components need to be reliable 100% of the time.

The DuraCoder is a great fit because “you can’t stop all environmental issues that come into play” (Jerry Strayer), however, the AMCI DuraCoder has proved to operate in these conditions while providing reliable feedback.

Quick change over with little down-time
Amity was able to change out the original optical encoder for the AMCI DuraCoder quickly and easily. DuraCoder’s industry-standard mounting pattern made it easy to replace the existing encoder.  While the standard lead time for the AMCI DuraCoder is 3 weeks or less, Amity could  not wait that long.  Because AMCI designs and manufactures their products in-house, they were able to expedite the process, sending the full shipment out within a few days.  After an easy installation, Amity’s swivels were ready to be sent off to KME.

Reliability and performance drive customer satisfaction
The AMCI DuraCoder has been installed on KME production models since 2008, ensuring the reliability & safety of their fire trucks.

There's an "infinite number of variables that go through all of this" explained Jerry Strayer, "using a DuraCoder has taken the error out of it". 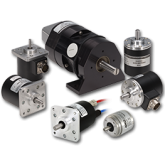